If you want to try good and cheap food this is the place. As the name says this is a big market with a lot of different stalls. You have the market itself on the ground floor where you can buy fish, meat, vegetables, fruit, cheese, hams, bread, sweets, and then there is the top floor (1st floor), where the stalls sell all kind of souvenirs from bags to pens. It is also on this floor where you can have a meal or a snack, or eat something even if you are not hungry. We tried the traditional Hungarian soup “Goulash” that was served inside a bread bowl and with caramelised red cabbage and sour cream. I have to tell you the red cabbage was to die for. Yeah, I couldn’t believe it either, but it was so tasty. 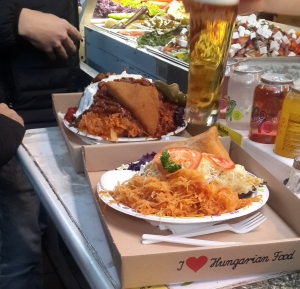 The food is really cheap and tasty. Just take a moment to look at this amazing plate of food. There was definitely people hungry here.

Note that on Saturdays the market closes at 3 pm and it is closed all day on Sundays.

Lángos belongs to the Hungarian fast-food choices. It is damn good. It is deep fried dough that is made as a pizza base and you can eat it simple or you can add the ingredients that you want. We had Lángos with cheese, ham and sour cream. Yummy is really the word to describe it. There are loads of places that sell Lángos and the Great Market Hall is one of them for example.

As we wanted to try the traditional Hungarian food and after looking at the reviews we decided to have dinner at this restaurant. It is a small and simple restaurant but very central and easy to find (very close to the Budapest synagogue). We had 3-course-dinner.  We had fried cheese plus the Winter Menu that includes soup, main (grilled chicken and fries) and dessert (chestnut pureé with whipped cream). Obviously you have many more options including many more menus. Everything was tasty and in the end of our meal we still tried a traditional hungarian drink called Pálinka. They have this drink available in different fruity flavours but be prepared because it is really strong. 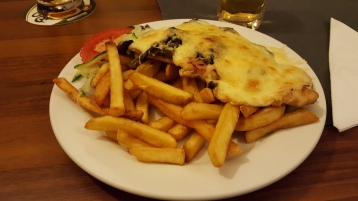 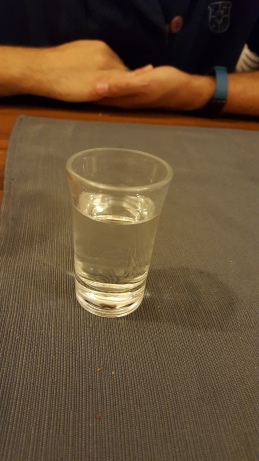 The complete meal was actually very cheap. It is a really good restaurant to try.

Puli is a restaurant that serves typical hungarian food. Maybe because it was Saturday night the restaurant was almost full but we still were lucky to get a table. As I said above we really wanted to try the Hungarian cuisine so we ordered chicken paprikash with dumplings and Toltott Kaposzta (stuffed cabbage with mince). I would like to say the food was marvelous but actually my dish was a bit bland and my boyfriend’s was too salty. As the restaurant was full maybe the food was not just for our taste.

These famous cakes are delicious. To be brief the dough has a shape of a cone that is rolled in granulated sugar and roasted over charcoal (like barbecue). While the sugar and the butter starts to melt a golden-brown  and crispy surface appears. It is so good. And on top of that you can add for example nutella, whipped cream, ice-cream, fruit. OMG, heaven. We had them from two different places, the first time I don’t know the name of the store but it was on the same street of the Szimpla Kert. The second time we bought them on Street Cakes. But you can find easily places where they are sold. They are amazing. Imagine, I am starting to salivate with the memory.

This is one of the best pastry shops in Budapest. The atmosphere is really nice, a little posh but not in a overwhelming way. When we ate here we didn’t have battery on our phones that is why we don’t have pictures but the cake and the hot chocolate with cream were delicious. Take a look at their website to see what it’s waiting for you here. 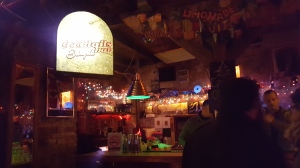 As we wanted to experience the nightlife of Budapest we ended up going to Szimpla Kert after some research. Szimpla Kert is one of the ruins bars of Budapest and as it was close to our hotel we spent two nights in here. Now, what is that ruins bars? They are bars in buildings/stores in the Jewish Quarter of the 7th district of Budapest that were abandoned during the World War II. Szimpla Kert for example is a converted old-factory.

Szimpla Kert is an open-air space with several balconies or counters, each of them serving different things, one is for cocktails, another for wine, other for shisha. In both days that we came here this place was packed and on our second day, as we wanted to try the shisha we arrived at 8:30 pm, but even though we only got a space in a sofa after waiting awhile. When we left, around midnight there was a huge queue of people to come in, so I recommend to arrive early, otherwise you will be spending a lot of time in the queue. Note that the cocktails are very strong but tasty.

This restaurant obviously do not have tradition Hungarian food, but it is always handy to go to a place like this, especially when you arrive late evening to a new country. The food was good, not amazing but tasty. We were delighted with the service here, people were so nice and friendly that we felt immediately welcomed to Hungary.

This is a journal of the art of woodworking by hand