In Brussels almost all the places to visit are closed to each other. I am about to talk a bit about what we saw and visit, but you can do your own route by every order you want. 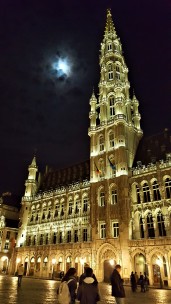 This was the first place we had the pleasure to visit and it is a “MUST GO” in Brussels. We have been here several times during our trip, because it is the central plaza in Brussels and you will end up here anyway. After we had dinner at Fritland we spend some time around this place. The lights and the architecture of the buildings make a breathtaking scenario.

It’s in here where is located the City’s Town Hall and the King’s house (also the Museum of the City of Brussels). Grand Place was nominated as UNESCO World Heritage Site in 1998.

This is  the most famous statue in Brussels. This “peeing boy” statue is a landmark in Brussels, and copies of the statue can be found everywhere around the city, in coffee shops, restaurants, publicity about it on the streets, EVERYWHERE. It is really impressive the importance of this sculpture in the culture of this city. Obviously before seeing this statue I personally thought it would be something huge and impressive, but it is actually quite small. As natural,  this statue was tried to be stolen several times. This bronze sculpture represents the need of distribution of drinking water in that area. But there are loads of different legends concerning the Manneken-Pis.

We were quite lucky because we had the opportunity to be present on the formal ceremony when the statues changes its costume (even though at the time we didn’t even know it was a thing in Brussels). You can check the schedule of this celebration in this website https://www.manneken-pis.be/calendrier-des-habillages/ 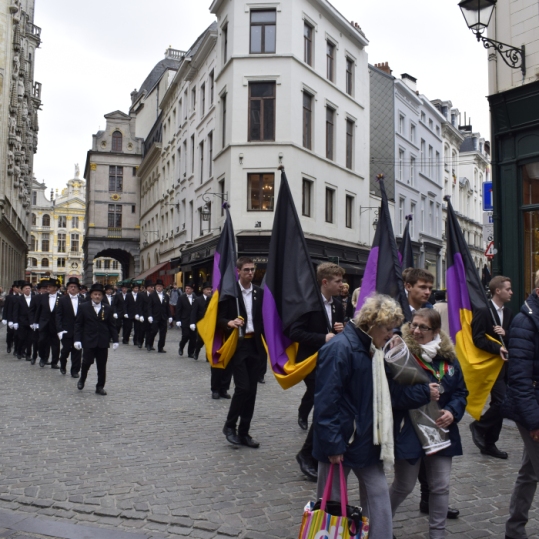 This statue is a feminine version of the Manneken Pis but not so famous.  This statue represents a little girl urinating. This statue is located in an alley, almost in a hidden place. There’s also the same type of statue with a dog in Brussels but we didn’t have a chance to go there. 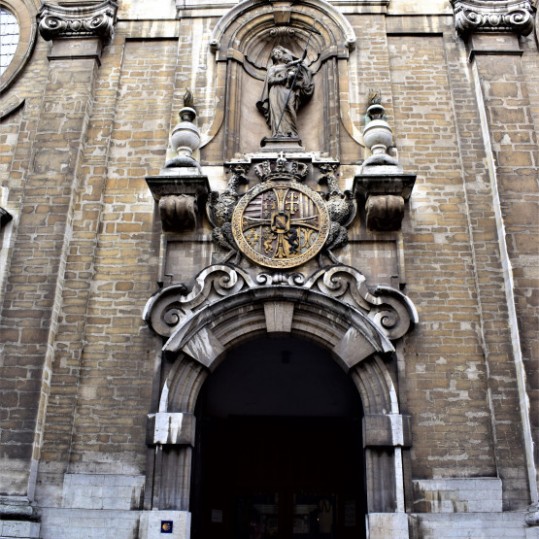 This church is located at the adress: Rue du Marché au Charbon 91

This church shows a baroque architecture and it was built almost exclusively with local sandstone. The street where the church is located is one of the seven streets that takes us to the Grand Place and it was already mentioned in old documents in the 17th century. 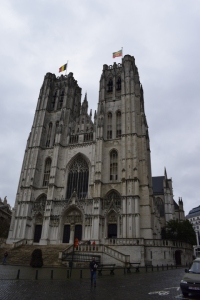 This cathedral looks amazing from the outside and soon we find out the inside matches the outside. This is one of the most beautiful churches I have ever been, even the photos cannot demonstrate its magnificence. The stained-glasses are just beautiful. In here (inside the church) we went to 2 different expositions, one about the roman city that was there located before the church was built e and the other about relics and treasures (price of the ticket was 2 euros). The lady who were receiving the money kindly gave us a lecture about the meaning of the stained glasses in this church present. She also said this church is even more gorgeous when it is a sunny day. It a “must-go” place in Brussels. 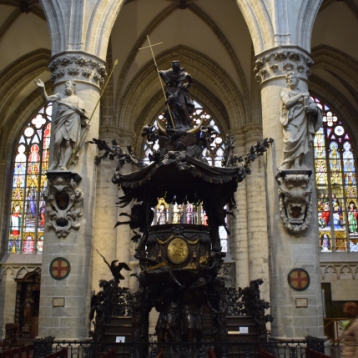 This small but not less beautiful church is located in the center of Brussels.

Actually all the churches in Brussels are worth visiting by their gorgeous architecture and their glass-stained examples.

The Basilica of the Sacred Heart was the last place we visited in Brussels. It is a bit far to walk from the center of the city (we did it and for that we almost lost our train back home). You can be much smarter than us and get the underground, there is a stop very close by. I am giving here my personal opinion, so I will accept if you don’t agree with me. The outside, the building is amazing. Really amazing. But comparing the inside to the other churches that there are spread in Brussels I don’t think is nothing special. But as I said I am giving my personal opinion.

The Church of Notre-Dame du Sablon is considered one of the most beautiful churches of Belgium. When we visited it was already twilight which was a shame because we couldn’t truly appreciate the amazing stained-glasses present in this Gothic church.

If you like art you cannot afford to not come here. There are 6 different museums together, the Old Masters museum, Modern museum, Meunier museum, Wiertz museum, Magritte museum and the Fin-de-siècle museum. We spent almost all afternoon in here, this place is huge. But it was a very well spent time. It was a really good visit. In this area you have a bigger view from the city.

Les Galeries Royales Saint-Huberts are arcades where you can find an ensemble of glazed shops. In here you can find coffee shops, chocolate shops and more temptations to the eyes and to the taste buds.

As most of you know one of the places where the European Parliament is located is in Brussels and that is where we went. This place is a bit outside of the touristic path, but you can easily walk until here.

The entrance is free and you can also take photo with a “parliamentary” background. Because we are so childish we enjoyed more than we should taking pictures. This a nice place to visit, to learn a bit more about political history and known world problems. It also has some games and activities to do. You can have more information in this website: http://www.europarl.europa.eu/visiting/en/brussels/station-europe

This is a journal of the art of woodworking by hand